Welcome back folks! This week has been full of ups and downs, pretty much the highest of highs and the lowest of lows, neither of which contribute towards the best of weight loss weeks! I’ve been off since last Friday, a mixture of holidays and well timed rotas, so I’ve tried to make the most of it in London, and preparing at home for Christmas.

Fat Friday is a weekly blog post tracking my weight loss and fitness journey, used to keep myself accountable, keep a record of my progress, and share hints & tips that have helped me. To track my progress, or read my previous entries, click here.

Please join me, support me, and help me along my way as I am to improve my life for the better!

Let’s start with the positive things from this week, and focus less on the negative. Emma and I jumped on the train and embarked on a 4 day trip to London that we have been looking forward to, and planning, for almost a year. We had musicals to watch, tours to go on, and were eagerly awaiting what would be an awesome weekend. It didn’t disappoint!

Day 1: My Dad kindly took us straight to the station, so we got on the train and set off straight for London. There was already snow on the ground across lots of places we past through! The snow hadn’t hit as far south as London, and although it would have been nice to see London under snow, it made getting to the hotel that much easier! We checked into our hotel early, and got set up for a busy few days. The hotel was in Covent Garden, perfect for our planned trips to the theatre, and pretty close to anything and everything we had to do. We had a double musical bill planned: Phantom of the Opera at Her Majesty’s Theatre, followed by Les Misérables at the Queen’s Theatre. The first was my pick, and was a muscial I have been waiting to see in London for about 15years. It didn’t disappoint – Ben Lewis was brilliant as the Phantom, and the Christine and Raoul performances were both really good too. Les Misérables was also really good, which was a relief, as I hated the film and wasn’t sure what to think. We also made a little trip to Chipotle too, something we planned to do since America!

Day 2: Our Harry Potter Studio tour had been booked for months, almost a year, so when we got up and saw the snow, we decided to battle on and that the snow would make the day more festive. We struggled to Watford on the train, but once there, the buses to the studios weren’t running and we quickly realised it wasn’t going to happen. So, once we found out that we could rebook for down the line, we got back on a train to London. 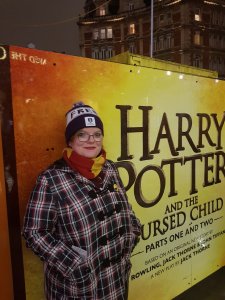 The snow gives as fast as it takes, as my Dad rang and said that Harry Potter and the Cursed Child has a lot of return tickets due to the snow, so we managed to score some tickets to both parts. OK, so there was no tour and the tickets cost quite a lot, but we were going to try and get tickets for the future anyway, so we counted our stars and felt lucky. The play was incredible, what started as a rubbish day was saved pretty quickly. Thanks Dad!

Day 3: The snow may have disappeared, but it was replaced by rain and wind, which were probably more annoying overall. We headed to Westminster first up for our tour of the Houses of Parliament, stopping by Westminster Abbey on the way in. I wrote a postcard to post in the central lobby of the palace for my Gran, and managed to post it halfway through a fascinating and informative tour. It was nice to see something in real life again that you normally only see on the TV. I then took Emma, via Pret (what can I say, we’re creatures of habits) to Harrod’s for the first time, where I introduced her to the delights of the Food Hall.

The entire long weekend was planned around Hamilton. I lucked out in getting tickets earlier in the year, and after the postponed opening, we were now in the first week of shows. I don’t really know how to describe just how unbelievably awesome the show was! It was like no live show I have ever seen before, and I think we’re going to try and get tickets to coincide with out return to the Harry Potter studios.

Day 4: The sun was (finally) out, and even though it was freezing, we finally managed to get out and about without being rained on. The plan to go to Trafalgar Square played out well, it was a lovely day, so instead of going inside, we decided to walk down The Mall, take in Buckingham palace in the sun, and walk back through St. James’s Park before taking in the wonders of the National Portrait Gallery. The British Museum will just have to wait for another day! We also visited Dishoom, a Bombay café near Leicester Square that served amazing brunch; I had the best eggs I have ever eaten in my life! 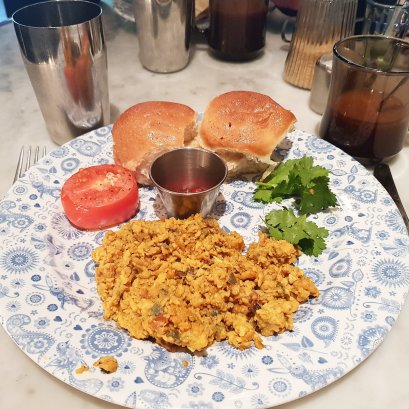 Life since returned to London hasn’t been as pleasant. New circumstances and news have changed the week dramatically, and from having an unbelievably good time, my week has plummeted. I’ve tried to stay buoyant and positive by throwing myself into Christmas full force. We have finally started to put our Christmas tree up (in our defence, we only bought it just before we went away, and were then away for quite a while). I have been wrapping presents and trying to make sure that I have got something for everybody. I think I’m good, but I will have inevitably forgotten something for someone. I have also written my Christmas cards. They’re not quite posting ready yet, but they’re mostly written and enveloped, and some are even addressed and ready for a stamp. So prepared!

Yes, this week has been a bit of a roller coast, but with every low, there must be some form of high after, and that came in the form of my TBTB Secret Santa box. Emma and I both received our boxes this week, and have both been pretty lucky! I plan to write a full unboxing later this month, but I thought I’d mention it here too becasue I am super lucky. Jenn also knew about my weightloss plan, and avoided sending much unhealthy stuff, even including some famous Halen Mon Salt for cooking! Can’t thank you enough Jenn, it’s amazing!

EXERCISE: 0 sessions, but lots and lots of walking round London

RECIPE/FOOD/SNACK of the week: Paté on toast

HINTS/TIPS of the week: Sometimes you just have to treat yourself.

Given everything that has happened this week, the amount I have eaten, and how little I have exercised, this week feels like I have lost weight rather than maintained, which is good. I would really like to go into Christmas week without putting any weight on, but we shall see how it goes!

View all posts by Liz Whitehouse

This site uses Akismet to reduce spam. Learn how your comment data is processed.

Do you hear the people sing?Sep 27, 2019
Viney Prospects Reunion